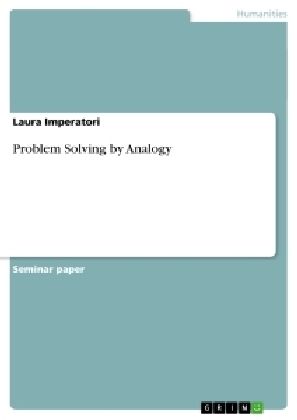 Seminar paper from the year 2014 in the subject Psychology - Social Psychology, grade: A, University of Cambridge (Department of Psychology), course: Part IB Experimental Psychology, language: English, abstract: We investigate problem solving by analogy in order to see whether solving a similar, easier problem beforehand aids in deciphering a more complicated one, given that the two problems have a similar (homomorphic) problem state. The two problems that have been used in this experiment are the historic Missionary & Cannibals problem (M&C) as well as its visual representation - referred to as "Counter-Moving" (CM) in the following.
The use of analogy in problem solving requires restructuring the problem in order to create an insight - as can be measured by "warmth" ratings - in contrast to problem solving based on trial-and-error learning (mostly common in elementary algebra) as proposed by behaviourists such as Thorndike. The restructuring of the problem relies on mapping from a source domain to a target domain. Since there is an infinite number of possible source domains, many humans have difficulies at spontaneous use of analogy and need its relevance to be highlighted. We have shown that the success rate on the counter-moving problem does differ significantly from the success rate on the M&C problem, which implies that the CM problem is conceptually easier to understand. Hence, we could show that solving a similar, easier problem with a homomorphic problem state does indeed increase the success rate of solving a more complicated one later by comparing the success rates between Groups A and B that solved the problems in opposite orders.