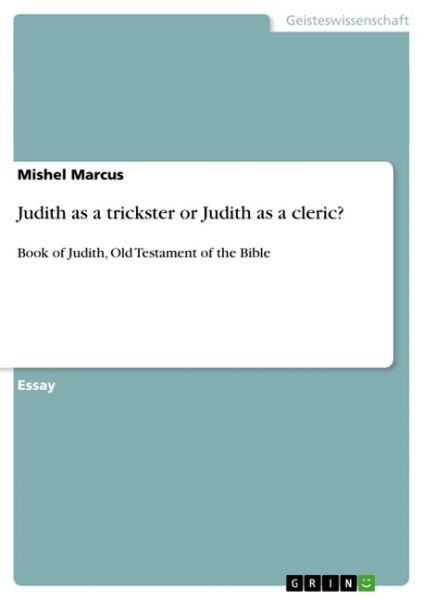 Essay aus dem Jahr 2013 im Fachbereich Theologie - Biblische Theologie, Note: 1,7, Ruhr-Universität Bochum, Sprache: Deutsch, Abstract: The Book of Judith is part of the Old Testament of the Bible. In contrast to other books of the Bible, the story is wholly fictional and just composed in order to outline the history of the Israeli throughout the previous 400 years. The book is written in the second or third century before Christ and is divided into 16 chapters. The story deals with Judith, a pious widow who is able to defeat Holofernes, who besieged her town Bethulia. Holofernes, a general under the Assyrian king Nebuchadnezzar was ordered to conquer and punish all countries which did not help him in his campaign against the Meder. As all countries in Asia Minor and Syria were conquered, the army reached Bethulia which they besieged as it was the only city which did not surrender. Despite the fact that the inhabitants of Bethulia gave up hope, Judith was the only one who relied on God. She left the besieged city and went down to Holofernes's camp where she pretended to be a defector. Blinded by her beauty and her wisdom, Holofernes allowed her access to his tent where Judith used her chance and decapitated him as he was sleeping drunk in his bed. With this action she saved her town and the Israeli.