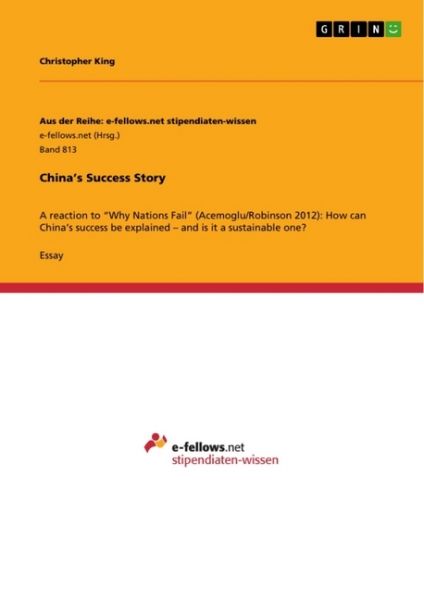 Essay from the year 2013 in the subject Politics - International Politics - Topic: Globalization, Political Economics, grade: 1,0, Indiana University (Department of Political Science), course: Politics of International Development, language: English, abstract: In the past three decades China improved the living conditions of its population dramatically and alleviated millions out of poverty. China achieved a tenfold increase in GDP since 1978, became the world's largest exporter in 2010 and is the second largest economy in the world after the U.S. (cf. Central Intelligence Agency 2013). Overall, China's rise in the past thirty years has been unprecedented in its scale.
The following essay will address the question of how to explain China's economic success in the past three decades (2.2) and in doing so, start out with an analysis of its political success (2.1). In a second step, it will be explored if China's success is sustainable in the long-term (2.3).