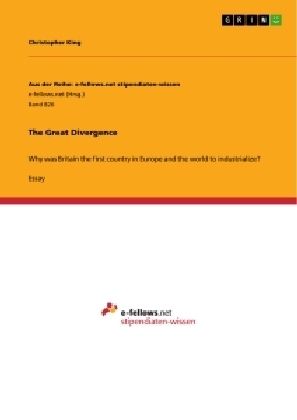 Essay from the year 2013 in the subject Politics - International Politics - Topic: Globalization, Political Economics, grade: 1,0, Indiana University (Department of Political Science), course: Politics of International Development, language: English, abstract: "Great Divergence" is the term used to describe the economical asymmetry that happened between the West and other parts of the world. To explain the process of the Great Divergence, a two-step analysis is necessary: Why was Britain in the position to industrialize and why could the other parts of the world not follow the quest of Industrialization, which led ultimately to the Great Divergence? The Industrial Revolution in Britain and its diffusion to Western Europe was the single most important event for the Great Divergence to happen. Britain had unique geopolitical contingencies on its side and was able to pull of the Industrialization due to the functionality of its centralized state and its achieved dominance in international trade. Other parts of the world, namely India and China, did not industrialize because they lacked the incentives Britain had and, in addition to that, they were also held back by dynamics of colonialism or internal struggles.
The paper is structured in the following way: After a brief prologue and a look at a contested issue in the field (2.), the explanation will start out with processes and developments that were necessary in leading to the Industrial Revolution and Great Divergence (2.1). The next step is reserved for an in-depth analysis of the Industrial Revolution in Britain contrasted with a look at reasons for a lack of such an event in India and China (2.2). By looking at the diffusion of Industrialization in the West and factors that prevented any sort of that in the East (2.3), an understanding of the Great Divergence will be provided and ultimately finalized and comprehensively summarized in the conclusion (3.).