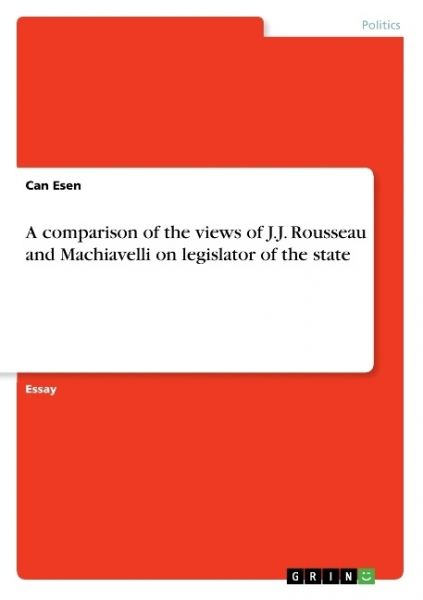 Essay from the year 2012 in the subject Politics - Political Theory and the History of Ideas Journal, Saint Mary's University, course: History of Political Thought, language: English, abstract: The character and role of the legislator in a perfect type of government are common themes in the thought of two of the great minds in Western philosophy: Machiavelli, who wrote during the Renaissance era and Jean Jacques Rousseau, who wrote during the enlightenment. One can find both differences and similarities on both of the two thinkers' ideas they used for describing the ideal legislator. They both argue that authority should not rest in the hand of just one man, but both give different reasons for this. Machiavelli says that 'many should remain in charge of the state' in order to guarantee stability and make it last long because otherwise there will be whether 'tyranny' or 'anarchy'; Rousseau believes that 'the legislator' should not be the sole authority and should not be granted any legislative right in order protect 'the general will' of the people, because otherwise the legislator would 'be tempted to act according to his 'private will' and destroy the 'common will' (Machiavelli 2012, p.356 & Rousseau 2012, p.572).