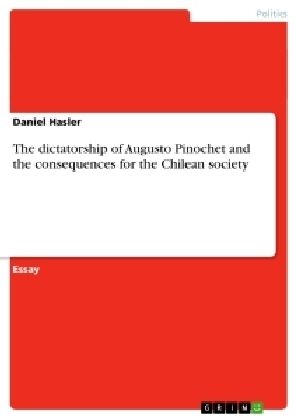 Essay from the year 2009 in the subject Politics - International Politics - Region: Middle- and South America, grade: 2,0, University of Applied Sciences Düsseldorf, course: Business English, language: English, abstract: For a long time, Latin America stagnated in economic growth. Especially in the 1980s, most countries were totalitarian dictatorships, where the economies lacked in openness and liberalisation. Most of the companies were state-owned and international business was impossible due to high restrictions. The residents were suppressed in their human rights by military forces, suffered from high poverty rates and bad living conditions whereas the leaders continued enriching themselves.
In Chile, when Supreme Commander of the Armed Forces Augusto Pinochet took over power by his coup d'état in 1973, a lot of people were tortured and killed by the fascist regime until the end of the dictatorship in 1990. Society was split in two halves: On the one hand the tortured opposition, on the other hand the torturers loyally serving the government. This caused a worldwide discussion on human rights and the necessity of an adequate punishment for the ex-dictator.

As a consequence, it is important to analyse closely the circumstances that led to the brutal coup, the period of the dictatorship itself, the consequences for the society, the influence on literature and media as well as the discussion on Pinochet's conviction in order to fully understand the situation of the Chilean citizens today.