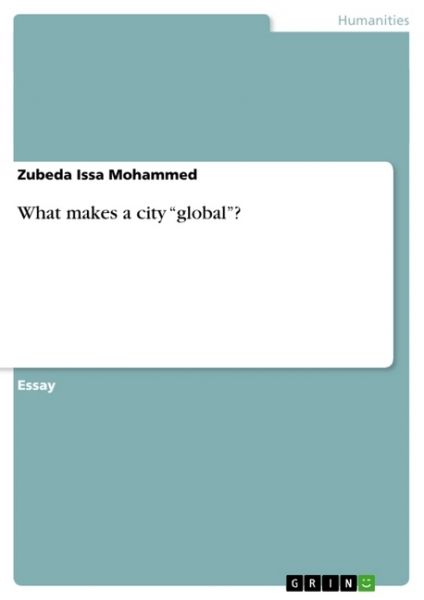 Essay from the year 2012 in the subject Sociology - Habitation, Urban Sociology, grade: B, Monash University, South Africa Campus, course: International Studies, language: English, abstract: Nowadays globalization occurs in places where a mass of people work and live in cities. However, for a city to achieve the title of being global, it must have values and ideas that will have an impact of the rest of the world. "Global city is a term that raises an understanding for the cognoscenti" (Low, 2005: p218). Low (2005) further says that a global city is a city that is well thought out to be an important node in the world's economic system. A global city has wealth, power and influence to other countries as well as hosts the largest capital markets. Moreover, a city that has wealthy multinational companies, good infrastructure, better economy, well-educated and diverse populations and powerful organizations as well as a good political structure that are linked to the other parts of the world like nowhere else is considered to be global (Badcock, 2002: p31). A global city, therefore, is the world's most important and influential city that covers the dimensions of the globalization. These dimensions are cultural experience, business activity, human capital as well as political engagement. London, New York, Paris, Rome and Tokyo are one of the most well-known global cities as it provides global competitiveness for its citizens and companies.