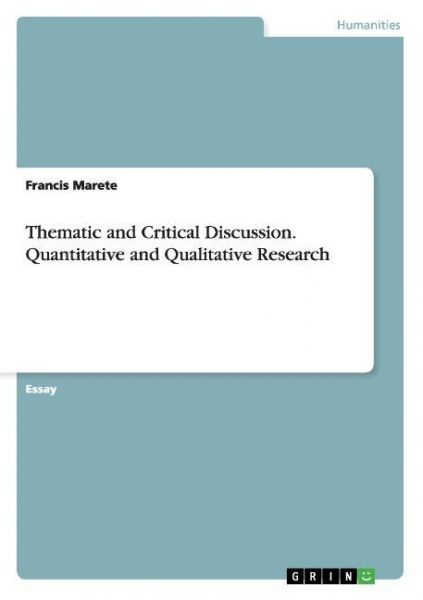 Essay from the year 2013 in the subject Sociology - Methodology and Methods, grade: B, Stanford University, language: English, abstract: In quantitative and qualitative studies, a distinction can be seen between critical and experimental approaches when conducting data analysis. Both approaches inculcate a form critique for a particular research. In most cases, experimental approaches are meant to identify the participants' experience and their different perspectives. It is also meant to understand participants' thoughts and ideas, practices and feelings from their language use, whereas the other one does not. Critical approaches, however, conflict with experimental approaches about mainstream research among other variations.
Thematic analysis, though rarely known by researchers is widely used method in both qualitative and quantitative analyses. These articles argue that this method of data analysis offers a theoretically flexible and accessible approach to both qualitative and quantitative data analysis (Boyatzis, 2008). Thematic analysis is thus a flexible and useful method used to analyseboth qualitative and quantitative data.
"A tale of two Cultures" depicts how some social scientists argue that there exist some similarities between quantitative and qualitative methods of data analysis. In the article "A Tale of Two Cultures", James Mahoney and Gary Goertz show that these two paradigms are made up of different cultures. Each paradigm is coherent, internally yet identified by contrasting practices, norms and toolkits. They introduce and outline the major differences that exist between the two traditions which touch almost all aspects of researches in social sciences. Such aspects include goals, designs, concepts and measurements, casual effects and models, case selection and data analysis (Boyatzis, 2008).