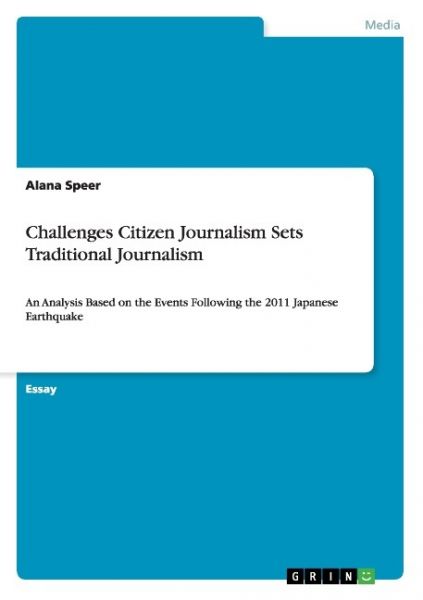 Essay from the year 2013 in the subject Communications - Journalism, Journalism Professions, grade: 1,7, Keele University (Media, Communications & Culture), course: Making the News, language: English, abstract: "'We are all journalists now' is a phrase sometimes heard [...] Is this correct? Is it enough to have a mobile phone camera and an internet connection to be a journalist?" (Örnebring 2013: 39)

When the earthquake and the fifteen-metre hit the coast near Tokyo on 11 March 2011, it wasn't news reporters or professional journalists that were the first ones that were on the spot. The most useful footage of the horrible events was gathered by the citizens of Sendai, a city on the North East coast that had been struck by the tsunami. This footage was later used by several news agencies for their television news reports about the tsunami. Without knowing it, those people filming the tragic natural disaster had engaged in a kind of journalism that challenges traditional news gathering and media habits: citizen journalism. In the following part, I am going to give a definition of citizen journalism and explain the practises that are used. After that I am going to show how and to what extent it challenges traditional journalism.