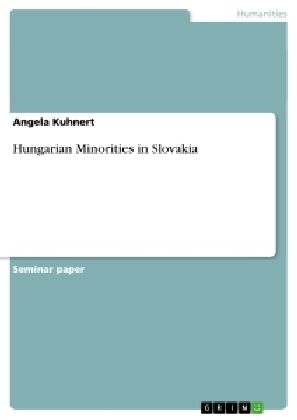 Seminar paper from the year 2011 in the subject Ethnology / Cultural Anthropology, grade: 2,0, Corvinus University Budapest, language: English, abstract: Large numbers of Hungarians found themselves in a new country as a minority after the Trianon Treaty in 1920 when Hungary lost two thirds of its land and one third of its population. Minorities in East and Central Europe have a long history and for the most part they used to live together peacefully however increasing national identity in the 19th century challenged the lives of minorities. Countries try to homogenize their population although some minorities had been living there for a couple of hundred years already. This essay examines particularly the ethnic Hungarians in Slovakia with a brief background on Hungarian-Slovak history, problems and improvements Hungarians have faced especially since the existence of the Slovak Republic as of 1993 and how Hungary seeks to support its people as a kin-state. Additionally a short insight on the other side is given, namely on how Slovaks think about the Hungarian minority and how the Slovak minority lives in Hungary.