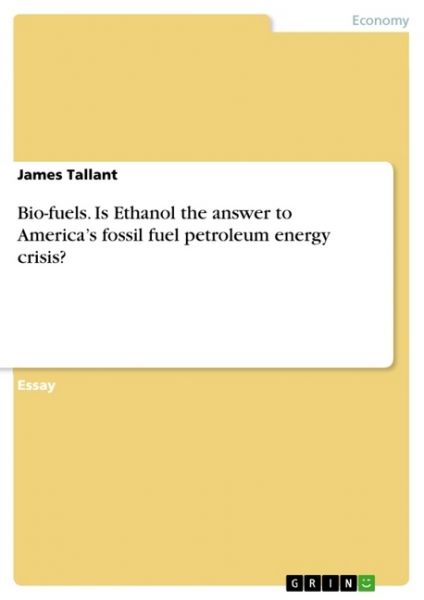 Essay from the year 2007 in the subject Business economics - Economic Policy, grade: 96.00, University of Phoenix, course: Utilizing Information in College Writing, language: English, abstract: The United States is in the midst of an energy crisis. The U.S. imports the majority of its fossil fuel petroleum products from overseas. The Department of Energy estimates that by 2010 the U.S. will import 75% of its required transportation fuels (Lauder, 2001). These petroleum-based fuels are not a limitless resource. At this time based on 2005 consumption rates of petroleum products, "the world has 41 years of proven reserves" (Dimotakis, Grober and Lewis, p. 5). Experts state that petroleum based exploration, discoveries and drilling will reach their peak by 2050. Increased awareness of the limits and over dependence on petroleum-based fossil fuels has led to a re-emergence of alternative fuels. The U.S. government has implemented an alternative energy initiative as part of their overall energy policy since the early 1970's. This new policy came because of the 1973 oil embargo. These alternative energy initiatives have focused primarily on bio-fuel sources. The two leading bio-fuel alternatives to the current petroleum-based fuels are bio-diesel and ethanol. "Driven by environmental, economic, and energy security concerns, the availability of ethanol (E85) is growing nationally" (U.S. Department of Energy, 2006). This evaluation judges if ethanol is the most promising bio-fuel to reduce the United States dependency on fossil fuels economically, practically, technically, and environmentally.