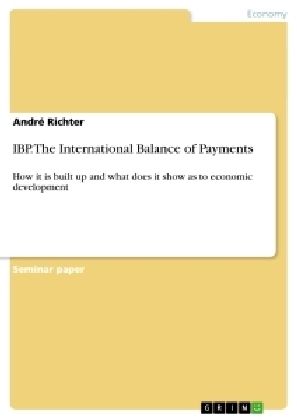 Seminar paper from the year 2010 in the subject Economics - Macro-economics, general, grade: 1,7, Berlin School of Economics and Law, course: Macroeconomics II: World Market and Currency, language: English, abstract: The international balance of payments is, according to the Balance of Payment Manual by the IMF, "a statistical statement that systematically summarizes, for a specific time period, the economic transactions of an economy with the rest of the world."

The first part of this work deals with the basic anatomy of the balance of payments, short BOP.
Like every other commercial balance sheet, it follows the principle of double-entry bookkeeping so that net debit and net credit positions are equal. The two main accounts of the BOP, which are further subdivided, are called current and capital account.
Further, there is a so called balancing item included into the capital account, which serves as the "equalizer" of the balance. The reader will see that it is an important tool for a country's central bank.

The second part shows as to what degree certain figures in the balance of payments reveal something about economic development. It is demonstrated that short-term as well as long-term prognoses should always be treated cautiously as the quality of a forecast depends on several factors. Same goes for the interpretation of positions in the balance sheet.
However, nowadays the BOP is a widely employed tool to measure transactions between several countries as well as to predict future economic conditions.