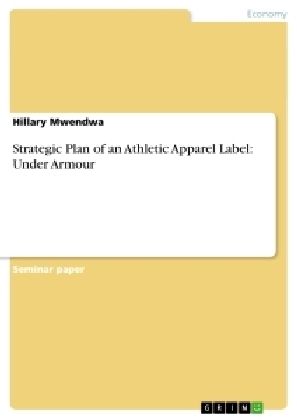 Seminar paper from the year 2011 in the subject Business economics - Business Management, Corporate Governance, grade: A, University of Cambridge, language: English, abstract: Armour has formed a strong client base of athletes and sport enthusiasts. Fans are loyal and choose the brand over others because they believe in the company mission and the quality of the product. The company has access to many loyal athletes that are used as influential in commercials due to the relationships formed with college and professional athletes. While successful in their performance apparel endeavors, Under Armour has faced a different experience with the original launch of their footwear in 2009, probably because it did not include any of the technology that makes the performance wear so valuable to its fans. With the addition of Under Armour-ESQUE Technology to the shoe designs, this attempt should be a bit more successful, but not everyone is convinced. When evaluating the Q3 2011 financial results, it was realized that many people did not like Under Armour's footwear strategy and it was predicted that a replica of the 2009 incidence would be experienced.