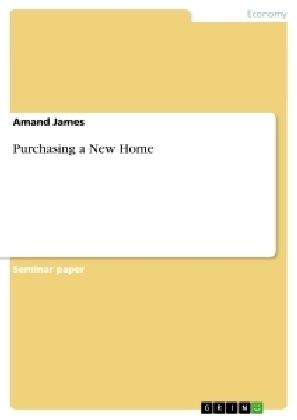 Seminar paper from the year 2010 in the subject Business economics - Miscellaneous, grade: A, Oxford Brookes University, language: English, abstract: One of the most important decisions a person makes in life that requires proper consideration is the decision to purchase a new home. This is because this is not a decision that can be made abruptly given its long term implications on one's finances. Nevertheless, majority of Americans are willing to become home owners. The 2010, US census depicted homeownership at a rising trend,67.1%, a bit abnormal given the economic hardships the country experienced in the recent past.(U.S. Census, 2010).This figure represents both first time home owners as well as those that had purchased houses before. In spite of this, a myriad of factors needs to be taken into consideration before making this very important decision of owning a home. They include marginal costs and benefits, the country's economy strength, principles as well as the played by both internal and international trade. This paper discusses some aspects that prospective home owners need to know before purchasing a home.