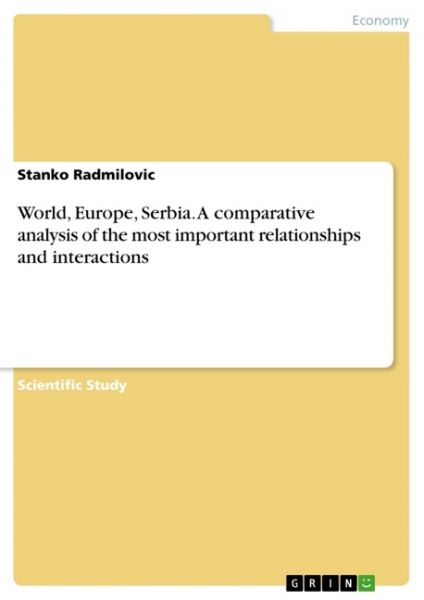 Scientific Study from the year 2013 in the subject Economics - Macro-economics, general, University of Novi Sad, course: Economics, language: English, abstract: The subject of this comparative analysis of the most important macroeconomic relationships and interactions in a sample of 46 countries, including most developed countries Europe, but the largest non-European countries that are developing rapidly. That give a twofold result. An insight into the changes in the global balance "economic power". The second, better understanding of milieu EU, which Serbia considers as "Port Hope", which will not only receive us with open arms, then would be willing to drag our little boat, which was in poor condition, in the last resort but without a lot of our efforts and sweat.

Comprehensive analysis exists in the Serbian language in the article "Europe in the world, Serbia in Europe - Comparative Analysis of the most important relationships and interactions." There, in English, are specified section titles, and at the end the Integral table with integral numerical factography.