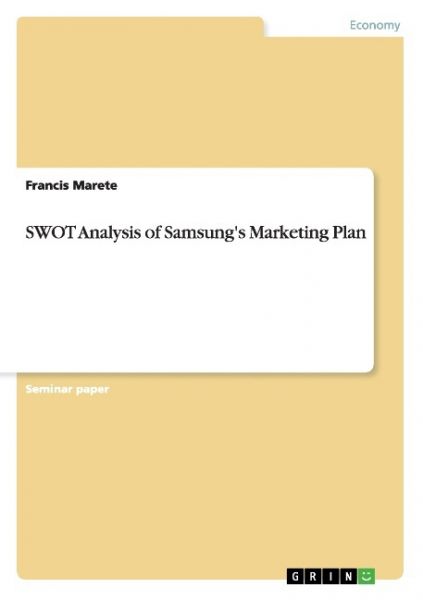 Seminar paper from the year 2012 in the subject Business economics - Marketing, Corporate Communication, CRM, Market Research, Social Media, grade: B, , language: English, abstract: Company Background: Samsung is a South Korean multinational company those starting its business as a small trading company and right now becoming world largest corporation. The company deals with its business in several sectors such as advance technology, finance, petrochemical, semiconductors, plant construction, skyscraper, medicine, fashion, hotels, chemical and others. The company was established in 1969 in Suwon, South Korea and known globally for its electronic products (Kelly, 2011). The company is manufacturing several latest technologies, electronic appliances such as mobile phones, tablets, laptops, TVs, refrigerators, air conditioners, washers and other products. The company runs its operations and sales its products in 61 countries with approx 160,000 employees in all over the world (SAMSUNG, 2014). Moreover, the company acquired the position of the world biggest IT maker in 2009 by beating the Hewlett-Packard (HP) previous leader. Its sales revenue in the segment of LCD and LED is the highest in the world. Furthermore, Samsung also becomes world leader in the segment of tablets, mobile phones and gadgets.
History: Company started its business as a Samsung Electronics Industry Co Ltd in 1969 and introduced some electronic products such as Black-and-white TVs, washing machine and refrigerator from 1960 to 1975. The worldwide establishment and expansion of the business and operations of the company started in 90 as entered in the Asia, Europe and American region countries. At the present time, the company is manufacturing world class and high quality smart phones, video cameras, TVs, LCD or LED and keeping its eyes on the current market requirement. Moreover, the company is now manufacturing world class and latest hardware and software, smart phones and 3G dives to compete its biggest competitors such as Nokia, Apple, and BlackBerry, Micromax etc. The company is looking for fulfils the current market requirement and demand of the customers (Chang, 2011). Its innovative, high quality and world