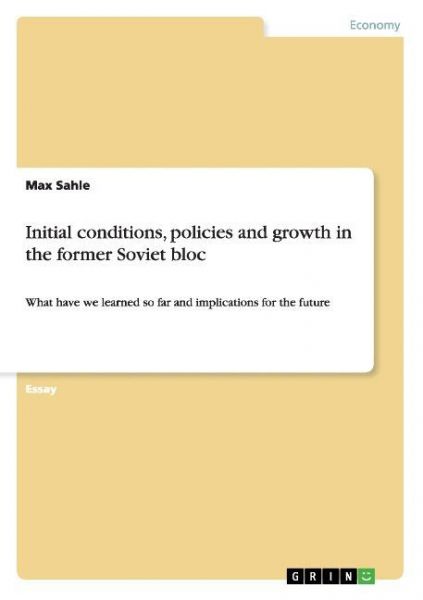 Essay from the year 2013 in the subject Economics - History, grade: 68%, University College London (School of Slavonic and Eastern European Studies), course: Economic Development and Policy, language: English, abstract: By the late 1980s, the ever more apparent failures and shortcomings of the planned economy and the collapse of the Communist political system in almost all countries of the Soviet Block enabled dramatic changes to all parts of society and the economy. Since the market economies of Western Europe and North America were the obvious reference point, transforming the planned economies into functioning market economies became a priority. This transition would ensure a better allocation of resources as well as technological progress and innovation and foster sustainable economic growth. To achieve this, it was necessary to profoundly change the underlying structures and incentives of the planned economy. While each country embarked on its own path towards a market economy, there is little dispute as to what reforms were necessary to get the new economic system going. Following Hare these include: (1) macroeconomic stabilisation; (2) price and trade liberalization; (3) privatization and enterprise restructuring; and (4) institutional reforms.

This essay examines the impact of some of these reforms on growth. It will also look into how initial conditions explain differences in growth outcomes that can't be fully explained by policy choices. Focusing on inflation and fiscal balances, the first section will explore the role of macroeconomic stabilization in fostering growth. This is followed by section 2 and 3 which examine institutional reforms and liberalization. Section 5 takes a look at initial conditions in the form of overall development and economic distortions at the start of the transition period. Section 6 concludes and draws implications for the future.