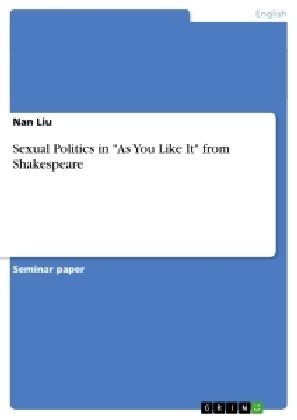 Seminar paper from the year 2013 in the subject English Language and Literature Studies - Literature, grade: 1,7, Ruhr-University of Bochum (Englisches Seminar), language: English, abstract: As You Like It is "a vital exploration of gender, the male and the female within us all" (Gay 76). And Arden is "a realm where you can dress up and change your gender, change your way of life" (ibid.). I agree with this statement. But before my analysis, I want to elaborate on the relationship between sex and gender identity. Sex is determined by nature, whereas gender is a cultural construct which is influenced by power, ideology, class and ethnicity. To put it differently, women are not confined to be compassionate and submissive and men to be active and dominant just due to their biological differences. However, people in the 16th century were restricted to their traditional gender roles. For example, women were 'The Angel in the House' and men exerted control over 'the weaker vessel', which refers to women because of Christian traditions and allegedly scientific reasons.
In As You Like It, we will find out the transcendence of restricted gender roles. To prove my thesis, I will first explore Rosalind's female role playing and male role playing by virtue of the costume. Then Orlando's acquisition of traditionally labeled feminine attributes is to be analyzed. In the last part of my essay, I will come to a conclusion about sexual politics in As You Like It.