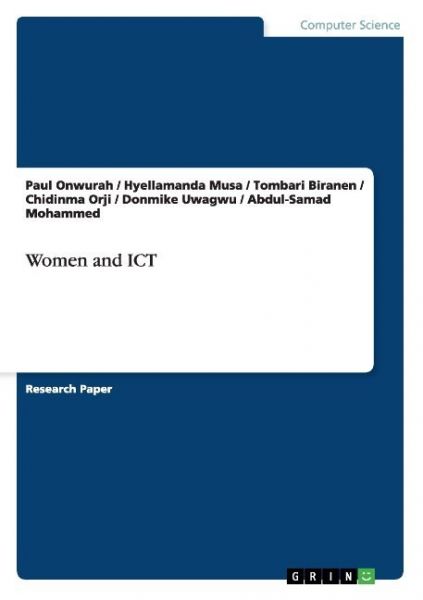 Research Paper (postgraduate) from the year 2014 in the subject Computer Science - Miscellaneous, , language: English, abstract: The world is changing and will still change more, only at an ever-increasing pace. The events and innovations of the last few centuries have served as testaments to the validity of this fact. The influence that science, technology and more recently, ICT have had on the world's dynamics cannot be overrated or over emphasized. ICT for example has become one of the strongest forces of the modern world, with applications in virtually every facet of human existence, from medicine to communications; transportation to entertainment; defense to artificial intelligence.
Unfortunately, statistics have shown that women's participation in IT and technology in general is low and declining. Berryman (1983) used the 'leaky pipeline' metaphor to describe the attrition of women from science and technology in general. The leaky pipeline is used to describe the "continuous loss of women in science and technology as they climb the career ladder" (Muffit, 2014). It has also been noted that employment opportunities for women in technological and engineering fields have been very low especially in areas such as the computer industry (Hoffmann-Barthes, Nair, & Malpede).
This paper seeks primarily to evaluate the low participation of women in technology and ICT, and to identify the obstacles hindering higher participation, in a bid to proffering solutions that will eliminate or at least reduce the effect of the obstacles.